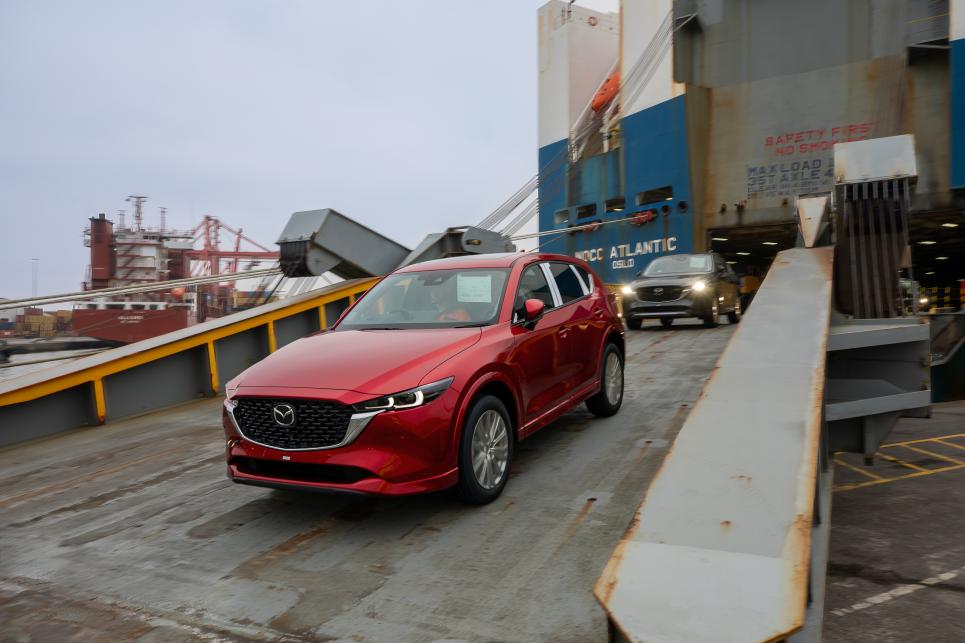 This opening shipment sees Bristol Port become the fourth port of entry in Europe for Mazda Logistics Europe, joining Barcelona, Antwerp and Zeebrugge. Over the course of the next 12 months the new centre will receive a vessel every 10 days or so with 1,000-1,200 Mazda cars on board.

For the first time since the founding of Mazda UK in 2001, Mazda has begun shipping cars directly from Japan to the UK, bringing benefits for dealers and customer alike. Having previously operated a logistics model that saw cars imported into Europe via Zeebrugge and then distributed into regional hubs in the UK, Mazda UK has now invested in a new distribution process that sees cars imported directly from Japan to Bristol Port.

The Bristol Port Company's highly trained Car Trade Operatives ensured each and every vehicles was safely discharged off the vessel into Mazda's new compound facility which provides capacity for over 8,000 vehicles and where there is also a centre for vehicle inspection and preparation.

Automotive Trade Director, Tony Dent, said: “Bristol Port is delighted to have been selected by Mazda as its sole import centre into the UK. With our first direct shipment of Mazda vehicles having been discharged at Portbury Dock, we look forward to establishing an ongoing and successful association with Mazda. As the main UK port for cars from the Far East, Bristol Port is in a prime position to provide the ideal logistics solution”.

Commenting on the new Mazda UK Port of Entry partnership, Mazda Motors UK, Sales Director, Peter Allibon, said: “the team at Mazda UK and our colleagues at Mazda Logistics Europe have worked really hard to update our logistics, port and stocking processes and this new direct Japan to UK operation will bring significant benefits to our dealers and customers. Our dealers will have access to a much wider stock choice within our new central compound, which ultimately provides an optimised logistics journey to support customer choice and delivery times”.

With all Mazda UK production coming from Mazda’s Hiroshima, Miyoshi and Hofu plants, the new Japan to the UK shipping logistics route streamlines UK deliveries as part of Mazda’s long-term strategy to ensure the very best logistical efficiencies and removes the risk of delays caused by Europe to UK transit issues, such as disruption at the Channel Tunnel or ferry issues. In addition, the new Mazda2 Hybrid, which is built in France, will begin arriving into Bristol later in the spring, shipping from Zeebrugge, Belgium on a regular basis.

The first shipment to arrive at the Bristol Port featured cars from across Mazda’s latest 2022 model year range, including the recently updated 2022 Mazda CX-5 and e-Skyactiv-X equipped 2022 Mazda3 and Mazda CX-30.