The Bristol Port Company will be sponsoring next month's Bristol stage of the OVO Energy Tour of Britain. 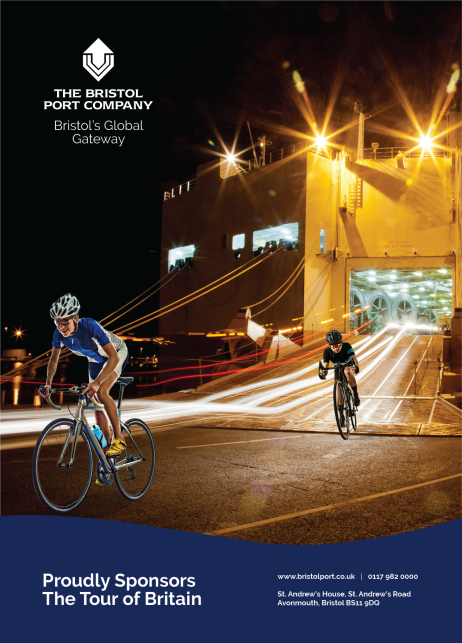 The prestigious road cycling race gives tens of thousands of fans the opportunity to see the world’s best teams and riders competing in some of the most scenic parts of Bristol and surrounding areas, finishing atop Clifton Downs.

Regional businesses are being encouraged to support the event – which comes to the city on September 4 – and the Port was first to step up.

David Brown, CEO at The Bristol Port Company, said: “As Bristol’s global gateway, the Port encourages the city to showcase itself on the international stage. We are proud to back a world-class event bringing the best cyclists and teams to Bristol. It promises to be a fantastic spectacle which inspires people to get actively involved in cycling themselves –  something we encourage at the Port. We are one of the region’s largest employers with 9,000 people employed within the Dock Estate, and this is an event that everyone can feel a part of when it comes to Bristol in September.”

Bristol will form the third stage of the eight-stage tour, which finishes in London. The route will cover 128 kilometres in a short and sharp stage that both starts and finishes at Ladies Mile on Clifton Down in Bristol.  It takes in both natural and manmade wonders, climbing Cheddar Gorge in the Mendip Hills while also crossing Clifton Suspension Bridge twice.

Commenting on the news, Heath Harvey, Chief Executive of race organisers SweetSpot Group said; “When we announced that the OVO Energy Tour of Britain would be returning to Bristol this September one of the first companies to pledge their support for the event was the  Bristol Port Company and it is fantastic that one of the region’s major employers and a key member of the West of England Local Economic Partnership have seen the benefits that hosting the event will bring to the city.

“The race will be attracting some of the sports biggest names and Stage Three will showcase Bristol and the surrounding area to a worldwide audience via our live television coverage, including of course the fantastic Bristol Port facility.”

The Bristol stage of the OVO Energy Tour of Britain will get underway at 11:30 on Tuesday 4 September, and include the likes of Clevedon, Cheddar and Midsomer Norton on the route, with an expected finish on Ladies Mile at around 14:30.  The full route and timings can be found here.

Live coverage of the entire stage will be shown on ITV4, with fans in Bristol and Somerset encouraged to head to the Start/Finish on Clifton Down, where they will have the opportunity to follow the action throughout via a big screen in the Tour Village, as well as having the chance to meet and interact with official sponsors.